Welcome the Blessed Mary to the Divine Table in the Heaven

“My soul glorifies the Lord,
my sprit rejoices in God, my Saviour.”

These precious words of prayer of Mary, the Blessed Virgin, were offered to God by her when she was conceived Jesus. These words well correspond to her tremendous joys when she would be lifted up high to the Heaven by the Lord Jesus, her own Son and the Son of God, as it is said in the Collect for the Feast of her Assumption;

‘Almighty ever-living God,
who assumed the Immaculate Virgin Mary, the Mother of your Son,
body and soul into heavenly glory,’

Responding to her prayers, Jesus in fact promised to his Mother and his disciples just before his bearing the Cross, followed by his Resurrection and his own Ascension;

The Feast of the Assumption of the Blessed Virgin Mary originated in the 5th Century. From the beginning, this feast has been the celebration of memories that Our Lord Jesus fulfilled his promises, first, to his Mother Mary, whom he thanked and loved most.

Now, what is the heavenly glory, into which the Blessed Virgin Mary was lifted up and was brought by her Son Jesus Christ? 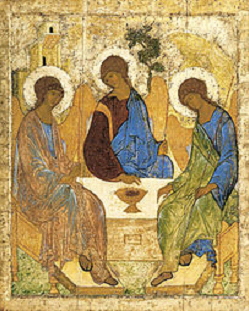 The Most Holy Trinity (by Andrei Rublev, a Russian monk)
「至聖三者」（三位一体）アンドレイ・ルブリョフ

This icon makes us imagine that the Blessed Virgin Mary must have been welcomed by the Most Holy Trinity as the special and most beloved guest, even as the Mother of God, in gratitude and love at the Divine Table of the Trinity in the Heaven.

It must be most suitable for the Blessed Virgin Mary to have been welcomed by the Most Holy Trinity as the Mother of God after she finished her most faithful and irreplaceable service throughout her life on earth to her Son and the Son of God, Jesus Christ.

The Mother of God served Jesus most faithfully throughout her life after she had accepted her calling from God with her following words of humble and full acceptance:

“You see before you the Lord’s servant, let it happen to me as you have said.”

Then, she conceived God’s Son as her Son and was made the Mother of God, then she brought her Son up and would be with him even until the time of his death on the Cross.

From the Divine table in the Heaven, surrounded by the Most Holy Trinity, Mary, the Mother of God, who has given the Body to her Son Jesus, as the Son of God, by the power of the Holy Spirit according to the will of God, the Father, will also give us our bodies, that is, she will give birth to each of us in her love and prayers as our Mother, too.

In the name of the Father and of the Son and of the Holy Spirit. Amen.